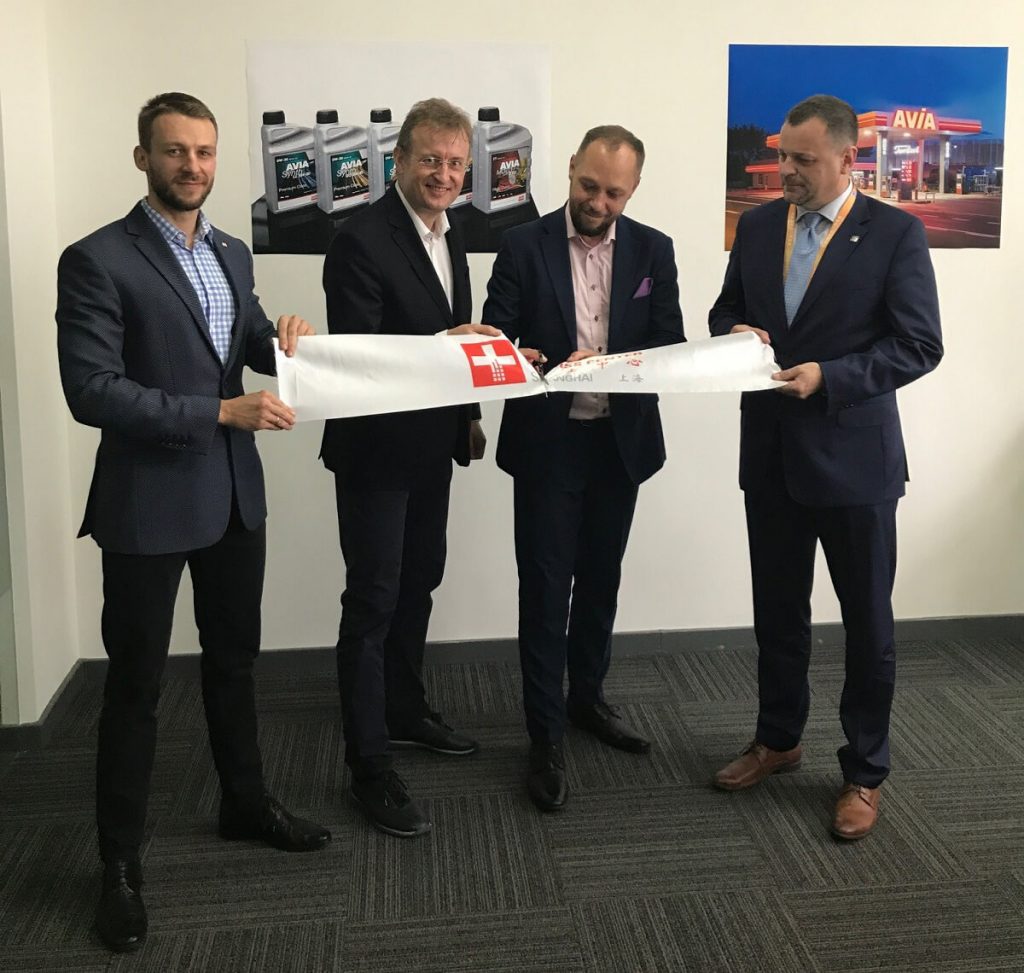 UNIMOT Asia LLC has launched its activity in the territory of China. Yesterday, the office, which is the new Company’s  seat, was officially opened in Shanghai.

The company UNIMOT Asia LLC, which on 12th September enlarged the UNIMOT Capital Group, officially launched its activity in China. The Company conducts sales of oils and automotive lubricants under the AVIA  brand.

– Having investigated the automotive market in China we decided that our offer including oils and lubricants would be attractive for local customers – explains Mr Adam Sikorski, President of UNIMOT S.A. – These products are sold by us under the renowned Swiss brand of AVIA, which additionally strengthens their market position and competitiveness.

It is also worth stressing that filters for private cars have been offered on this market under the AVIA, which are produced by PZL Sędziszów S.A., whose majority shareholder is Unimot Express Sp. z o.o.

The newly opened office of UNIMOT Asia LLC, being also its seat, is located in the prestigious location – Swiss Center Shanghai.

– We could not have imagined a better location – comments Mr Adam Sikorski. – Owing to the fact that our Parent Company is a member of the Swiss Association AVIA International, we can be present in the very heart of this business district. We entrusted coordination of UNIMOT Asia LLC in the foreign scope to Mr Mateusz Wójcik, who is a graduate of local universities (among others, Shanghai University of Finance and Economics) and an assistant of the Consul General of the Republic of Poland in Shanghai. His precious diplomatic experience and expertise in economic conditionings of the Chinese market will certainly help us quickly and efficiently develop Company’s activity – adds President Sikorski.

Introducing oils and lubricants by UNIMOT marks the beginning of the expansion of AVIA’s brand on the Chinese market. Under the red and white colours the Company also plans to initiate the development of a chain of petrol stations, which it currently is successfully developing in Poland. It should be reminded that the UNIMOT Group has been developing a chain of franchise petrol stations under the AVIA brand. Since October 2017 the Group has also offered all its fuel and energy products.

Launching UNIMOT Asia LLC is perfectly in line with the policy of the currently ongoing fairs – China International Import Expo 2018, whose message is import of goods and services into the territory of the People’s Republic of China. Representatives of UNIMOT, headed by the President Adam Sikorski, are present at the CIIE Fairs within a special national pavilion prepared by the Polish Investment and Trade Agency (PAIH).

The China International Import Expo 2018 Fairs are held on 5-10 November in Shanghai. The event initiated and officially opened by the President of China – Xi Jinping, constitutes a very important step towards liberalisation of trade and opening of the Chinese market to import. Government delegations from 25 countries are  present at the Fairs, including the Polish government delegation, which includes, among others, the head of the Prime Minister’s political cabinet minister Mr Marek Suski, ministry of agriculture Mr Jan Ardanowski and vice-minister of entrepreneurship and technology Mr Tadeusz Kościński. Poland is represented by 81 enterprises that promote their products and services in numerous sectors, among others, energy and resources, automotive, transport, tourism, agriculture, chemical industry and others. UNIMOT S.A. has published a report for H1 2020. The UNIMOT Group has achieved growths of volumes...

The company UNIMOT Energia i Gaz from the UNIMOT Capital Group has signed a cooperation agreement...