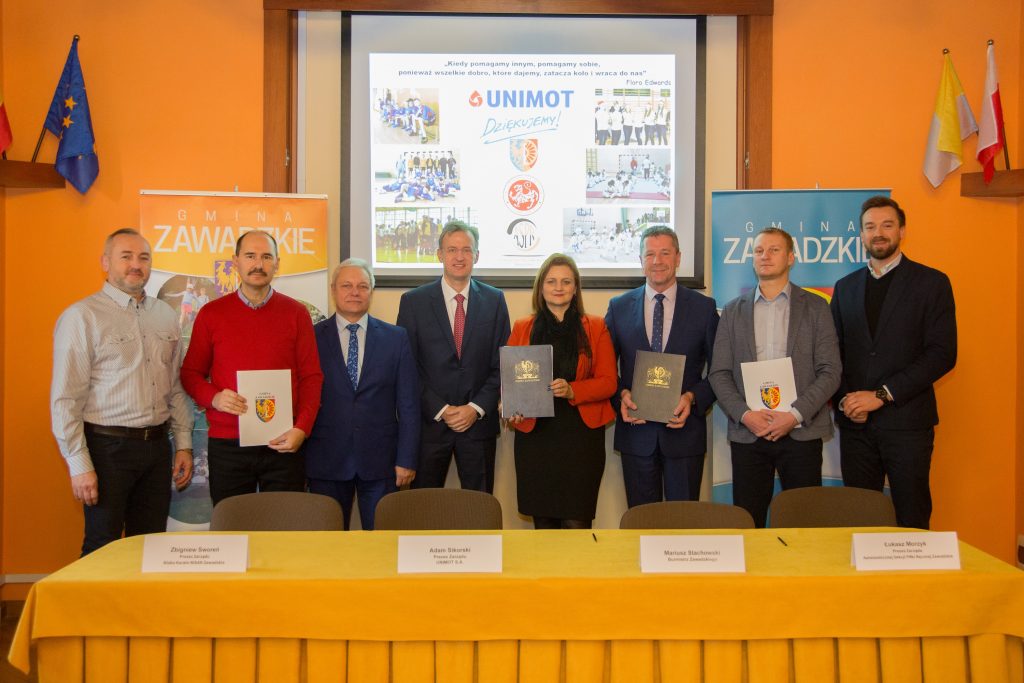 UNIMOT S.A. signs an agreement with Zawadzkie municipality (Opolskie Voivodeship) regarding financial support within which the company will build a modern playground and will invest into two sports clubs.

On 16th December 2019 an official agreement on cooperation was signed at the office of the Zawadzkie municipality’s mayor between UNIMOT S.A. and the municipality under which in 2020 the company will provide financial support for the municipality in its investments for the residents. Within the confines of the cooperation UNIMOT will provide the municipality with the amount of PLN 100 thousand, which will be used to construct a modern and safe playground for children in the centre of Zawadzkie and will also support two local clubs that develop sports passions among the youths: the karate club NIDAN and the Autonomous Section of Handball.

– The cooperation with Zawadzkie Municipality and supporting its residents is a perfect example demonstrating that in its actions UNIMOT follows social responsibility in conducting business.   – says Mr Adam Sikorski, President of the Management Board of UNIMOT. Although we are the company that has set sail on the domestic and international market, we do not forget where we started and where our roots are. Therefore, for years now we have been supporting local initiatives , not only in Zawadzkie, but also in Czestochowa. – adds Mr Sikorski.

For several years UNIMOT has supported education of outstanding, young Poles at best American and European universities (such as: Harvard, Stanford, Yale, Oxford or Cambridge). Cooperating with the IVY Poland Foundation, UNIMOT provides students with interest-free loans to cover the cost of tuition. In total the UNIMOT Group has granted such loans for over 10 participants for the amount of over PLN 200 thousand in recent years.