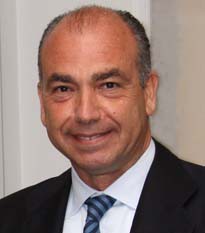 A citizen of Spain, a graduate of the Universidad Pontificia de Comillas in Madrid. In the years 1981-2003 Mr Querub was a Chief Executive Officer and the member of the Board of Glencore España S.A. – a partnership operating in the sector of crude oil, metals and minerals in Spain, Middle East and Africa.

Since the year 2003 Mr Querub has been a partner in Andria Inversiones Inmobiliarias S.A., a real estate company, and Incogas S.A., involved in trade of the liquefied natural gas. In the period 2007-2013, as a co-founder of Moka Consulting he developed a strategy directed at African countries, producing liquefied natural gas, and in the years 2009-2013 he was a member of the Counseling Committee of the Portuguese company Iberiapremium SGPS.

Since the year 2013 Mr Querub has been a partner of Consejos y Estrategias Técnicas y Empresariales SL, which provides general business counseling, and a member of the Management Board of the Swiss partnership Bluequest Resources AG, involved in the trade of metals and minerals.

In the years 1996-2001 Mr Querub was the Chairman of the Jewish Community of Madrid, and since the year 2011 he has been a Chairman of the Spanish Jewish Communities Federation. He is also a member of the Management Board of the Tel Aviv University and the President of Yad Vashem in Spain. In the year 2007 he received the Prince of Asturias Award and in 2012 he was awarded the Moroccan Ouissam Alaouite Order.